There once was a toy cowboy named Woody who was the favorite toy of a boy named Andy.  He enjoyed his position and used it to justify reigning over the other toys as leader even though they barely respected him.  One day, Andy got the latest fad, a toy called Buzz Lightyear, who, unlike every other toy ever made, didn’t know he was a toy.  Normally it took a long time for the inevitable process of insanity to take hold, but Buzz had it built right in.  Woody was insanely jealous, but at first his reaction was mild.  He tried to put Buzz in his place with ridicule and bullying, but Buzz was far too self confident and delusional for that to work, so Woody eventually attempted to murder him by pushing him out a window and framing one of his fellow toys, an innocent radio controlled car named RC.

The murder attempt was fairly successful.  Buzz did indeed fall out the window, but it didn’t go as Woody planned.  He was caught, and the other toys seized the opportunity to overthrow their leader and toss him out the window as well.  Only one toy, the girls’ toy Bo Peep which Andy played with for some reason, tried to speak in his defense, but her pleas fell on deaf ears.  They were too enthusiastic about finally having an excuse to get rid of the arrogant Woody.

Though he was angry at the assassination attempt, Buzz refused to retaliate, and he even accepted Woody’s “help” to get back to Star Command, which was actually just a trick to get them both back to Andy’s room.  In the process, Buzz’s delusional bubble burst, but he quickly came to terms with reality and worked with Woody on a plan to escape Andy’s sociopath neighbor Sid and return to the far-too-preoccupied-with-toys Andy.

With no help from the other toys, and in fact one attempt by them to kill Woody just before he and Buzz succeeded in reuniting with Andy, the two unlikely friends came back to their human friend.  Buzz even foresook the company of the other toys in the moving van to land in the luckily open sunroof of the car that Andy rode in, perhaps because he realized his station over them, or perhaps in recognition of their shabby treatment of Woody.

This is Toy Story.

Worship it or go to Hell. 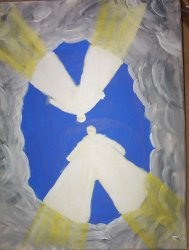